skip to main | skip to sidebar

two is the magic number. 'nine' is just what we call it.

So this is my endorsement for the film, Nine, but it is also a love letter to two of my favorite actresses. 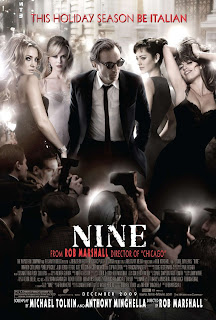 I should start by divulging that I’m a pretty obnoxious Fellini fan. Admittedly, it probably stems from some hero worship I harbor for D.A. Miller; however, that’s immaterial.

I had reservations and doubts about Nine before viewing it. I thought it was going to be an egregiously mishandled pop-music-video-esque celeb-orgy that desecrates Frederico Fellini’s masterpiece, 8 ½. Instead, I found Rob Marshall's film to be a provocative take on Fellini’s story and film (which was first adapted to the stage) that paid prudent and calculated homage to its originative sources: actors, cinematography, autobiographical referentiality, etc. Daniel Day Lewis, though deficient of Marcello Mastroianni’s je ne sais quoi, was satisfactorily charming and brooding.

The fact that it was a musical didn’t bother me. On the contrary, I enjoy musicals and I felt that the film did a great job at maintaining its movie-musical-ness. I recall in a lecture with D.A. Miller, him mentioning that Fellini’s films—the psychological internalities they afford, the quirky histrionics of his imagination, the (albeit, diegetically motivated) musical performances that often occur, and so on—lend themselves to being adapted into musicals. For instance, the musical and subsequent movie musical, Sweet Charity, is based on the Fellini film, Le Notti di Cabiria (my personal favorite; later you may see why).

The rest of the cast, as expected and including Fergie, sparkles. Fergie is actually quite spectacular as Saraghina. Hear here:

The diamond among jewels—hardly any rough here—is Marion Cotillard. Not surprisingly, she plays Luisa, the wife of Guido Contini, the tragically flawed protagonist of the film. Both characters are thinly coded versions of Frederico Fellini and his wife, Giulietta Masina, which is true for both 8 ½ and Nine. I say that it isn’t surprising Marion Cotillard plays this character because I found her performance in La Vie en Rose very reminiscent of Masina’s performance in Le Notti di Cabiria, and nearly matched its virtuosity. Curiously, the character of Luisa isn’t much like the actual Masina. Though you should take this remark as only purely rhetorical, Cotillard’s Luisa is closer to Anouk Aimee’s performance in 8 ½ than it is to the actual Giulietta Masina. I just find it fitting Cotillard plays a character, in Nine, that is based on an actress who Cotillard resembles, performance-wise, in La Vie en Rose.

I urge you to delight in the similarities. I do. By “similarities” I mean “pathos,” of course.

In this scene from Le Notti Di Cabiria, Cabiria realizes, too late, that her lover is a con man who has wooed her with the intention of stealing her money and throwing her off of a cliff. They are at a cliff. Dun dun dun. I don't have subtitles for you. Sorry.

This scene from La Vie en Rose takes place after Edith Piaf has been waiting all evening for her lover to arrive. In it, she recovers from a delusional episode. I can't embed this scene, forgive me. 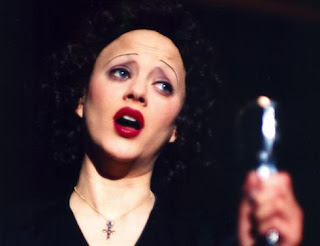 [Another chance for you to click]
Both scenes unfold with similar emotional arcs. If you didn't cry, I seriously doubt your capacity to feel. Their performances in these two scenes aren't the only likenesses I saw. I find them both so deeply comic and tragic, in the most honest and earnest ways, in their respective films.

The lesson here is watch Nine. Watch all of Cotillard and Masina's films.
Posted by robert andrew perez at 2:29 AM

originally intended be strictly be a poetry blog for unrefined ramblings, i've expanded msb in attempt to further assimilate into the blogging community by creating a space for personal commentary on general literature, visual art and miscellaneous cultural contribution. i do not pose as an impartial spectator nor an academic critic. i am merely a man-boy who participates in the act of looking at art and generating ideas. and i write poetry. the name of the blog is derived from a faux manuscript made for a poetry workshop given by a mentor, lyn hejinian. the manuscript, though eventually becoming a glorified chapbook, was--in its formative stages--a series of boxes with poems printed on each face of the cube. i ran with the idea of poems as objects and wanted to concretize verse in the most literal way, matching boxes that were stuck inside of each other. cutting and construction of nesting boxes proved unnecessarily taxing, so i settled for naming the book match[ing] box[ing] stick[ing]. this blog attempts, at the digital level, to view cultural artifacts as physical objects with the agency to crush like an anvil or tickle like a feather. i guess we'll see.