skip to main | skip to sidebar

stricken and egg (a review)

Spectatorship of the world premiere of FACT/SF’s site specific work, Stricken, is analogous to witnessing the birth of a genius: a visceral, awkward and violent apocalypse of rough virtuosity. In a quaint industrial space in the cuts of SOMA, The Garage’s RAW (resident artists in workshop) program made a prudent decision in collaborating with Charles Slender’s young contemporary dance theater project. Admittedly, I am familiar with Slender’s previous choreography, even having been in a short jazz piece of his when we were both undergraduates at Cal, and am good friends with him. Don’t let this admission color my review: I am a compulsive truth teller. Though fresh, FACT/SF’s conceptive mother has matured in a way that has enabled him to bare a piece that is menacingly precise and beautiful. If this is his San Francisco debut, Slender is going to be a big deal. 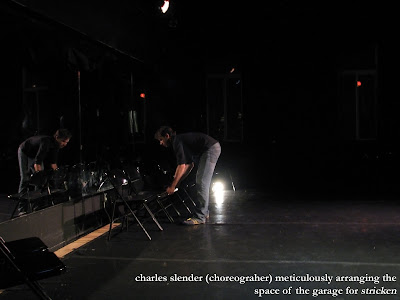 The first, palpably unsettling leg of Stricken posits the audience in an interactive configuration, demolishing the fourth wall. We’ve seen this, okay. He’s blurring lines of theatrical demarcation. Oh, but so much more is happening. Not all audience members are created equal. Some are relatively safe from interaction, on chairs that are on risers. Or are they? The head-bucketed dancers blindly navigate themselves behind and around even them. The rest of the audience is in a circle on what would be considered the tradition space of performance. Half of the circle is facing a mirror and two light sources (sometimes on and sometimes off). All the while, the audience on the risers watch those in the circle. We are confronted with our own mechanisms of dispersing awkwardness. We see each other cross our legs, uncross them. We whisper to each other and notice a shrug. There’s a forced smile, an involuntary one. We are all watching each other not watching each other watch the dancers who cannot see. It seems like eternity. We then encounter text: a series of numbers with an inaccessible sequence, to us it is random. To the dancers, its part of the choreography; they know which numbers to say when. They eventually all join in unison.

At this point, the four dancers break into smaller scenarios. Some outside smoking and en frottage, seen through a barred dirty-paned window or the sliver of a doorway ajar. Some groping through the dark grasping for light. One dancer, head finally de-bucketed, enjoying some narcissism. Awkward scenario follows awkward scenario. How long will was this going to go on? How long was the water going to be running? This was an experiment of breaking points.

Subsequently, the choreography becomes more synthetic. A pop song, a sexy one, by the Dandy Warhols, a band predicated on kitsch and pop and the choreography of Slender’s at this point followed suit. The technique is facile, at this point, and you feel a sense of relief around you. Finally, the audience has something less maddening to hold on to. However, the dance evolves/devolves into a hypersexual entity. The fun and the sexiness of the choreography start to proliferate into disturbing heights. Perhaps (this may be just me) Slender is making fun of his jazzy roots. In any case, the gyrations and hyperextensions catalyze yet another series of gut-wrenching awkward set-ups. The water is still running.

The dancers revisit their buckets. Two play stop and go. The power dynamics of master and slave parallel that of choreographer and dancer. Spectator and subject. Gender seems less important here than attitude. On a related note, the garments of the dancers play a key undertone in both unifying and characterizing each player. Eric Pennella worked his magic again for Slender, having designed previously for him at Berkeley.

As the piece progresses, the choreography gets more technical and complicated. The dancers execute it with unlabored ferocity. The water is still running.

Toward the end, we are slowly being abandoned by the dancers. Throughout, the dancers appear to abandon one another from time to time. Some are left in the dark longer, underneath their bucket. Alone outside or in the bathroom. The piece culminates to the abandonment of the only male dancer. He stares at himself in the mirror, contemplating something. He screams into the water that has collected into the sink. It is unclear if it is a gesture of embarrassment, frustration, anger or simply unfettered hysteria. The audience is just relieved the water had stopped running. But as we hear the last blubs of the water going down the drain, and we give a short chuckle at its silly noise and the door closes behind the last dancer, we realize that the disturbing-ness of the last 30+ minutes has seeped into our skin. We are, by our selves, startled.

Charles Slender has revitalized a genre that has become pedestrian in the art scene, for me. Yes, challenge the notions of normal and abject. Yes, complicate and problematize gender. Yes, create striking and technical contemporary dance. Yes, be kitsch and be avant-garde and be theatrical. Yes, explore sexual boundaries. Yes, dive into the innate hysteria we fear and possess. But do all of that with some frontal cortex. Create a through-line in your work that marries these objectives and synthesize something novel and intelligent. It isn’t enough anymore to draw lines on your body or rip up a picture of a supermodel. We have moved beyond sex-shock and nudity. We have had our fill of beautiful lines. Give us a third dimension. Sure, Charlie, we’ll take four, if you have it.
Posted by robert andrew perez at 12:12 AM

originally intended be strictly be a poetry blog for unrefined ramblings, i've expanded msb in attempt to further assimilate into the blogging community by creating a space for personal commentary on general literature, visual art and miscellaneous cultural contribution. i do not pose as an impartial spectator nor an academic critic. i am merely a man-boy who participates in the act of looking at art and generating ideas. and i write poetry. the name of the blog is derived from a faux manuscript made for a poetry workshop given by a mentor, lyn hejinian. the manuscript, though eventually becoming a glorified chapbook, was--in its formative stages--a series of boxes with poems printed on each face of the cube. i ran with the idea of poems as objects and wanted to concretize verse in the most literal way, matching boxes that were stuck inside of each other. cutting and construction of nesting boxes proved unnecessarily taxing, so i settled for naming the book match[ing] box[ing] stick[ing]. this blog attempts, at the digital level, to view cultural artifacts as physical objects with the agency to crush like an anvil or tickle like a feather. i guess we'll see.